And i have to do it again

Best game ever made, seriously this has brought me so much joy

This is an amazing game! if only it was downloadable so i can play it offline-

When you pray and get HE, the text just get out of their correct place 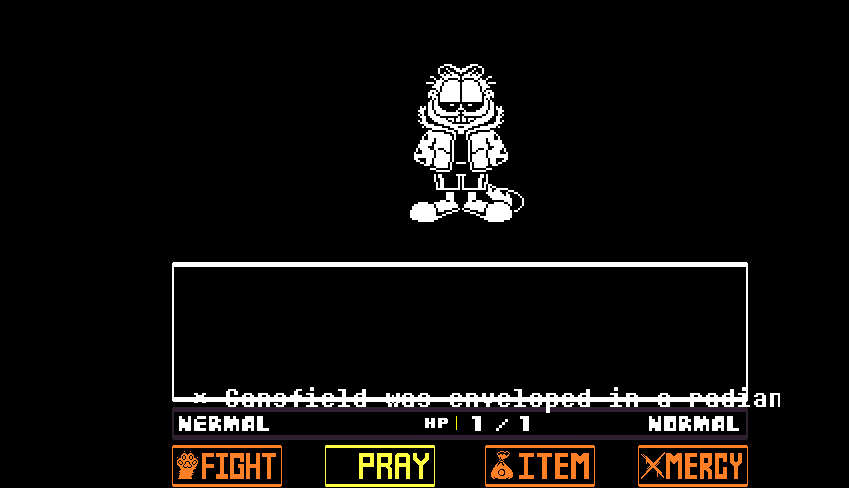 I think game has a bug? because when you get lucky with pray and if you picked hard and maybe monday mode, The thing gives your health over the limit.

my game wont load after the lumpy touch logo

each time when i cant restart or do i have to press a button or somthin?

at the end of a pray only run (i mean, when Gorefield's HP reaches 0) the game crashes, although the prayer song is still playing

noice game, but that laser one is too hard lmao

Laser attack. The big black ball follows your path and shows up so you need keep moving and make sure it's doesn't block your path.

I love this game. The only thing it's really hard for me is in 2nd phrase with comic part with sans and garfield because its so small and you have side attack and top attack at the same time.

i (kinda) mastered that attack

when will we be able to download this masterpiece?

The game is amazing, but it isn't as fast as it is from your perspective, even if I maximize my computer settings.

I tnink Garfild's head in 3 phase is toooooo slow. I never took damage on this attack.

Can you add a "noob" level to make it less difficult.It's too hard I think.

what do you mean my level?

I gave it a try while recording

This is fun and tricky and creative.

I'll try again....Once I get back from Abu Dhab....Sansfield sent me packing.

i still remember seeing gameplay of this on yt

Obviously a masterpiece. It took me a while to master the attacks, but once I did it becomes super satisfying to dodge them all. So far I've beaten normal and hard mode, perhaps one day I'll even conquer Monday itself... (prolly' not)

The one criticism I have is the pookie lasers. They are the hardest attack to dodge consistently IMO (yes, even more than Garfield gun), I'd suggest removing/tweaking the exploding AOEs that happen during that attack.

I am a noob perhaps, but agree, all other attacks seem consistent and easy enough to dodge, it feels odd the pookie lasers are in phase one, especially with the explosion, especially when it seems they are a bit random on where they are done, rather than following a pattern.

I fine with the laser one. It's easy when you know how to dodge. But the Garfield gun with sans is hell for me because you in small area and has dodge 1 bullet aim sideway and attack from up.

Just saw your youtube video on this game and wanted to give it a try tonight, wish me luck! Looks and sounds both fun and epic :)

I'm way too noobish to beat this, even on normal difficulty! Great game regardless. Makes me want to give Undertale a try. It's one of those games I always want to try but something always came up. Anyway, here's my experience with this game.

BTW it would be nice to be able to download this game and also adjust the volume.

This game looks great and plays great. The attacks are clever and funny. I got both endings on normal mode and even beat Sansfield on hard mode.

Bug: For one playthrough, I just used "pray" the whole time instead of fighting. But when Sansfield was defeated with a powerful meteor, the game simply went to a black screen and continually played the pray song on loop. I didn't get an actual ending this way.

Update: This bug has been fixed :) Thank you Spasco

This would be a hell of a lot easier for me if I could rebind the movement to WASD. Guess I'll have to use a AHK script or something.

I really loved the concept and the spirit ! And that's really hard as a monday !

This is awesome, The attck patterns had me on high alert.

I've been in QA for 15 years now, and my curse didn't leave me. Ended up on an infinite loop of the prayer song when I only used Pray to do everything.

I killed the final phase with a wish punch, and black screen with only the music remaining. I laughed at my curse for following me even in there.

can you release a downloadable build

is it only me or the game is lagging

can u do xbox controller progress?

Praying is literally in every religion if I remember correctly. Christianity is not special in this aspect

Not to mention, I'm pretty sure that the prayers are a reference to Earthbound, considering it has a very similar mechanic through means of the character Paula.

are you living under a rock?

Praying is just not for christians? It's for any god? I can even say i praying to my god SANS. Because you can pray to any god even if anyone else doesn't beleve in it.

I recommend you pray to get help from goldfield by he instantly brings you to next phase thats probably the only way to get to the end on Monday difficultly.

Did you... get the 1/10,000 chance pray? Are you legit? Also btw people have already beat Monday Mode

just did a double check and someone beat Monday.

I got every move down. The only hell one for me is the 2nd phrase with comic area with sans and garfield.

shit that was so perfect ✨

The pookie blaster attack is too hard, ever other attack I can dodge fully, but the pookies have too much RNG IMO

But I gotta fight sansfeild. Theres no other option.

Reply
Neco The Sergal233 days ago